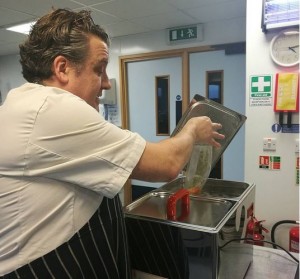 Clifton Food Range supported the master class with equipment, allowing the students to practice their sous vide skills before using them in a busy working kitchen. The sous vide master class is part of a three week sous vide course.

Sous vide was a concept of cooking which was invented in the early 1970’s and the French term is a literal translation meaning ‘under vacuum’. Food items are placed in a vacuum bag where they are vacuum sealed before being placed into the water bath which is temperature controlled and will stay at one consistent temperature.

The aim of the master class with longstanding Clifton customer Chris Wicks was to educate the students from a chef’s point of view and give them the best insight they can before the students branch off and become qualified chefs.

These master class workshops are a great way to bring together local companies and chefs to inspire the young enthusiastic students and to pass on the extensive knowledge to help them achieve their goals in industry.