Frederick Forster is crowned National Chef of the Year 2011 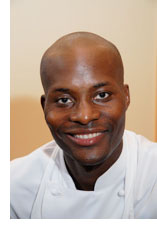 Clifton Food Range® was delighted to watch as Frederick Forster, Head Chef at Nuovo Restaurant, Buckhurst Hill, gained the well deserved title of National Chef of the Year 2011. The competition was held at The Restaurant Show, Earls Court 2 on 11th October and was followed by the awards presentation.

Frederick is a valued Clifton Food Range® customer and has been using Clifton water baths for a number of years.

Melvin Dickson, Managing Director of Clifton Food Range® comments: “It was great to see the award go to such a determined, creative and hard working chef who presented a well thought out and innovative menu using our sous vide baths to his advantage”

Frederick competed against seven other finalists where he had to prepare a three course menu with ingredients from a mystery basket. He wowed the judges with his creative menu which included sauté scallops with crab “Beignet” and roasted sous vide breast of duck with braised thigh flavoured with smoked bacon.

David Mulcahy, organiser of the competition and Vice President of the Craft Guild, said: “All our congratulations go to Frederick on his fabulous achievement, in what was a tremendous end to another fantastic National Chef of the Year contest. In fact, the standard of quality on display throughout the entire competition this year has been remarkable.”

Everyone at Clifton Food Range® sends Frederick their warm congratulations and looks forward to watching his career progress over the coming months and years.