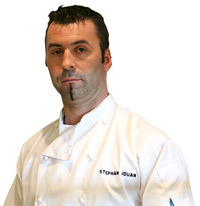 Stephane then started working with the FJB Hotel Group at the Haven Hotel and the Sandbanks Hotel before taking up his present role at the Harbour Heights Hotel.

Q) Who introduced the sous vide technique and where did you hear about it?
A) I was aware of the technique and had always had an interest in this style of cooking. I had identified the huge potential and welcomed the chance to trial this exciting new method on a commercial basis, as did my team.
Q) How long have you had Clifton Range water baths in place?
A) The first water baths were delivered to the Sandbanks in early 2006 where I was Executive Chef at the time.
Q) How many Clifton Range baths do you have in use?
A) There are three in the main kitchen for the restaurant. In the banqueting kitchen – which is used for conferences, weddings and larger functions – we have a 56 litre water bath.
Q) Which sections of the kitchen are they used in?
A) They are used extensively for the preparation of vegetables like butternut squash, celeriac, baby leeks, asparagus etc. These are then incorporated into the starters and main courses for both the lunch and dinner menus. The pastry section uses a bath for the preparation of such things as crème anglaise. In the sauce section, a wide range of sauces are produced by the sous vide method.
Q) What have you discovered about the difference in texture and flavour using Clifton Food Range water baths?
A) With beef, lamb, duck and chicken there has been a significant improvement in texture and taste. The improvement in the taste – and particularly the texture – of fish cooked in a water bath has been vast. 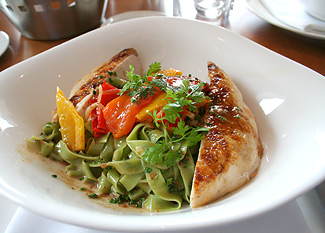 Q) How much of your menu is now processed using the water baths?
A) 90% of all menu items are now produced following the sous vide method. This covers all meal times, for example we produce scrambled eggs for breakfast, then through lunch and dinner for dishes like Chicken Supreme, lamb rump and topside veal.
Q) How accurate are the results?
A) The results truly are 100% accurate every time. The consistency is maintained every time a dish is prepared.
Q) Have there been any changes in the stress levels in the kitchen environment?
A) These have been drastically reduced. There are no noisy fan assisted ovens and no pots and pans clattering, and seeing as we have an open kitchen this is much better for the diners. As the cooking now takes place in specific areas there is less ‘traffic’ and running around in the kitchen.The reduction in noise seems to automatically put less pressure on everyone, so people are less tired and more productive.

Clean up time has also been reduced as we simply discard the sous vide bags whereas before we would have had to wash up the pans.

Q) Is there now an increased time for service and more flexibility?
A) Using Clifton water baths is less labour intensive, which means we have a lot more time for service – and to ensure that every dish goes out perfectly right.Things are far more flexible now as we have most dishes on standby. When an item is called, for example a fillet steak, we take it from the holding bath, add final seasoning, sear it to finish it off on the griddle pan – and away it goes.
Q) Are there any changes in skill levels in the kitchen?
A) Because there is less pressure, I now have more time to pass on my skills to junior chefs who can use the Baths to prepare items I would previously have had to do myself. All levels of chefs can get involved with the system so it creates a good bond and we all work as a team. The junior chefs get satisfaction because they are now trusted to work on expensive produce such as foie gras, which they may not have previously been allowed to do before gaining more experience. The baths enable them to produce consistent results which is confidence building.We all have more time now and for the first time have an afternoon break. Previously chefs worked straight through, but a proper four hour break in the day has increased their quality of life and will mean better staff retention.
Q) How do the products stand up to the rigours of kitchen life?
A) The water baths are proving to be reliable and an integral part of our equipment and our processes.
Q) Has there been any reduction in running costs?
A) Energy costs have reduced significantly in the kitchen as a result of reduced gas consumption, which has in turn led to an increase in gross profit.
Q) Has there been any effect on staff costs?
A) Previously we had two people in the sauce section, but now we only have one. The other has been deployed to another section, strengthening the flexibility of the team.
Q) Has there been any change in levels of wastage?
A) Before we introduced the water baths we used to guess what the likely demand was going to be based on the previous week’s history. Now wastage is almost nonexistent. By advanced preparation we can smooth out demand. Again, this has contributed vastly to our improved GP which has risen between 10 and 12%.
Q) Have the customers noticed a difference in food standards?
A) Definitely in terms of texture and tenderness, especially with the beef dishes. Before the introduction of the sous vide system and the water baths, we occasionally had some customer dissatisfaction but this has been eliminated, and the fillets are now the talk of the restaurant! Customers are genuinely curious to know how we achieve such fantastic results.
Q) Have you had new opportunities for creative menu development?
A) Yes, I have had much more time to experiment and design menus around the new system. I like to push the boundaries and experiment with new menu items, and this equipment lets me do this more than ever.
Q) Has implementing HACCP been easy?
A) Not entirely, as we had to do additional risk and work assessment, and not everyone understood the process of vacuum packing and having food on hold or standby. This has involved quite a bit of training, but the new chefs are really willing and eager to be part of this exciting new era. We found it best to write down all the procedures covering the process, from vacuum packing through to service.
Q) What does the Food & Beverage Director think of the changes in the system?
A) He has readily accepted the new approach as within two months of its introduction he could see cost savings. In fact, at the outset he was happy to let me pioneer the sous vide system because I had convinced him that financial benefits would follow.
Q) How important are the Clifton Food Range water baths to you and would you recommend the product?
A) The water baths are an essential part of our equipment and we could not function without them. I would definitely recommend the introduction of Clifton Food Range water baths. 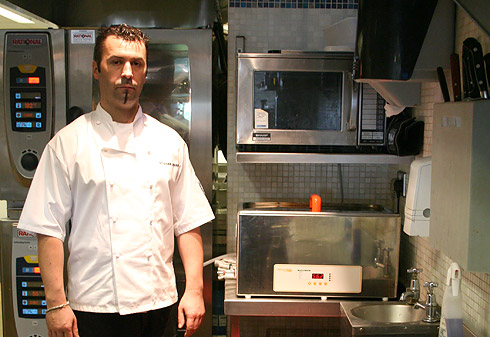